The normative and legal provision, organization and activity of militia dispatch centers of Soviet Ukraine in 1969–1991 have been studied.

In terms of reforming the law enforcement system, miscalculations and mistakes of the past years should be avoided. The specifics of dispatch centers’ activity is that it represents the interests of all services, combines the goals and objectives of public order, prevention and detection of crimes, as well as coordinates their actions in case of emergencies. The efficiency of crime detection, assistance to victims and detention of perpetrators depends on the effective organization of interaction between services and units.

Thus, the creative use of obtained experience to improve the activities of the dispatch centers of internal affairs agencies will to some extent avoid mistakes and miscalculations made in previous historical periods. 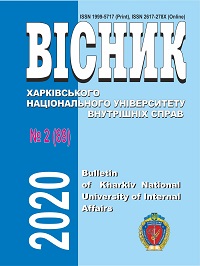