The peculiarities of the application of the amnesty institution under the legislation of the Russian Empire are studied, in particular, the Regulations on Criminal and Correctional Punishments of 1845, 1885, 1903, tsarist manifestos, the Amnesty Act of 1905, etc. Thus, the normative consolidation of concepts and partially the procedures of “pardon” and “condonation” was reflected in the Criminal and Correctional Penal Code of 1845, which were duplicated in the Regulations of 1885 and 1903. The reasons for the abolition of punishment could be the following: incurable illness or death of the accused, reconciliation of the parties, the statute of limitations for the crime and pardon. According to the norms of the Code, pardon of criminals came from the supreme autocratic power and the sovereign’s mercy.

The cumbersome form of the tsarist manifestos, which were mostly issued in connection with solemn dynastic events, proved ineffective for state and political acts. When revolutionary and national movements in the Empire began to take their first steps, the government had to grant amnesty as proof of its sincerity and readiness for democratic changes. An example of such a step was the issuance of an amnesty act fated from June 25, 1905, which was a significant shift in the direction of modern legal understanding and legal enforcement of this legal institution.

Also the author identified and analyzed several forms of amnesty, which were found in the legislation of that time: abolition, which abolished the general law for a particular case and extinguished the crime itself; indulgence, when not the crime itself was extinguished, but only the punishment for the committed crime; rehabilitation, according to which a person was released from serving a sentence and restored in rights. Depending on the interests and goals pursued by the state, different types of amnesty took place at different stages. In general, the Russian Empire was aware of its three forms: theocratic, dynastic and political.

Candidate (Ph.D.) of Historical Sciences, Docent.
Department of theory and history of state and law.

Faizulina D., 2008. The history of the development of the institution of exemption from criminal liability and punishment in Russia [Istoriya razvitiya instituta osvobozhdeniya ot ugolovnoi otvetsvennosti i nakazaniya v Rossii]. Aktualʹnye problemy èkonomiki i prava, No. 2, pp. 151-157. 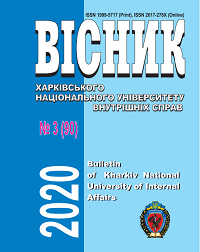