It has been stated that violent crime of military personnel is conditioned both by general determinants for the whole crime and by special criminogenic factors.

The author of the article has highlighted the main determinants of such crime in details. They traditionally include the following determinants: economic, political, ideological, cultural, national, socio-biological, socio-psychological, organizational and administrative, legal, etc. Their specific features, causes, consequences and mutual influence at the present stage of Ukraine’s development have been determined; and certain ways of improving the situation have been specified.

Particular attention has been paid to determinants of violent crimes committed by military personnel during combat operations. The author has indicated on predominance of the socio-psychological nature of crimes in such conditions and the prevalence of certain manifestations of post-traumatic stress disorders among the participants of hostilities in Eastern Ukraine; the author has noted that such disorders have recently been identified by psychologists as “ATO syndrome”.

The author has expressed opinion that commission of violent, lucrative and violent crimes by military personnel during combat operations is in many cases a consequence of the influence of specific social and psychological determinants, where researchers name: weakening of social control factors; exacerbation of problems of meeting the needs for existence; increasing the level of nervousness of the population, increasing the conflict level in interpersonal relationships; weakening the morality, etc.

It has been emphasized that the elimination of these criminogenic determinants should be a priority in the prevention of violent crimes by military personnel.

Department of criminal disciplines of the faculty of law (postgraduate student). 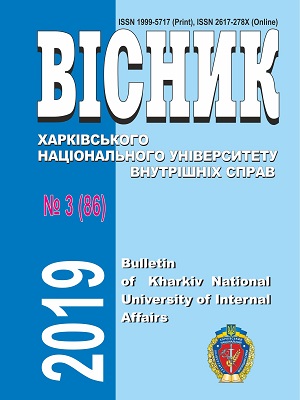